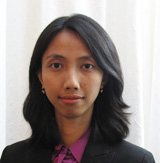 Dr. Aletheiani was a Fulbright Foreign Language Teaching Assistant at the School of International Letters and Cultures, Arizona State University in 2007-2008.  She developed curriculum and instructional design for hybrid (face-to-face and online) Indonesian courses at all levels and taught courses on Linguistics, the Indonesian Language, Research on Indonesia, Curriculum Theories, Social and Cultural Pedagogy, Schooling and Cultures, Alternative Schooling and Free Schooling, and Multiculturalism at Arizona State University.

She served as an Assistant Resident Director/Project Officer for the Study Abroad to Indonesia Program run by the U.S. Department of State, Bureau of Educational and Cultural Affairs, and was a collaborative author of the Critical Language Scholarship Program, Malang Indonesia (2010), a handbook published by the U.S. Department of State’s Bureau of Educational and Cultural Affairs. She has been working closely with and advising both undergraduate and graduate students on their research projects dealing with several topics on Indonesia, such as: politics of education, critical history and de/colonization, language and policies, global health, religious studies, and issues of globalization.

Dr. Aletheiani is currently working with curriculum studies scholars from the U.S., Jamaica, South Korea, and Portugal, sharing research and translation projects on the works of international curriculum theorists under the American Association for the Advancement of Curriculum Studies (AAACS) Internationalization of Curriculum Studies Task Force. She in particular has been translating, from early Indonesian to English, excerpts of curriculum works written in late 1800 and early and mid 1900 by Ki Hadjar Dewantara, an Indonesian curriculum theorist (See Aletheiani D. R., 2016). She is the elected secretary of the American Association for the Advancement of Curriculum Studies and also serves as a faculty advisor to the Yale Indonesia Forum (YIF).

Dr. Aletheiani has been an instructor of Indonesian traditional dance since 2008, and has organized and performed in various events both on and off campus. Her most recent theater and dance performances and choreography appeared in the theater documentary titled Islands: The Lost History of the Treaty that Changed the World (2017) which was broadcast by NPR and RRI. and featured on BBC radio.