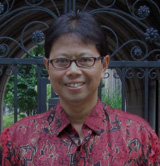 Indriyo K. Sukmono arrived at Yale in August 2001, teaching beginning, intermediate, and advanced Indonesian and Javanese classes. His early career in Indonesian language teaching began in 1986-88 at PIBBI, an Intensive program in Indonesian language and culture at Satya Wacana University in Salatiga, Central Java where he finished his BA in language teaching and pedagogy in 1989. He was a lecturer at Atmajaya University in Jakarta from 1989-1996, teaching English and Indonesian for foreign business entrepreneurs before moving to Tempe, Arizona. Mr. Sukmono completed a masters degree in Educational Media Technology in 1999, and a second masters in English as a Second Language (ESL) in 2001 at Arizona State University, while serving as a teaching assistant in Indonesian language. He also taught Indonesian in Southeast Studies Asia Summer Institutes (SEASSI) for five summers (1996-2000), at ASU, University of Oregon, and University of Wisconsin.

Mr. Sukmono’s professional interests include development of multimedia materials for language learning & instruction and Indonesian contemporary literature. With support from the Center for Language Studies and the Council on Southeast Asia Studies at Yale, his current ongoing projects include reading module design, and production of audio-video teaching materials for Indonesian language instruction.

Mr. Sukmono is an active member of COTIM (Consortium on Teaching of Indonesian and Malay) and NCOLCTL (National Council of Organizations of Less Commonly Taught Languages) in the U.S.

Mr. Sukmono serves as the faculty advisor to the Yale Indonesia Forum (YIF), and has organized numerous conferences, workshops and events at Yale on the politics and culture of Indonesia.